SAFETY NOTE: This article is part of a series of articles on crate training. Before starting any of the training outlined below, make sure to read the introductory crate acclimation article. There you'll learn about setting up the crate properly to avoid startling your dog and read the safety notes to ensure that your training goes safely and successfully.

Method #2: If You've Got Plenty of Time for Training or If Fido Seems Scared of the Crate

This method works well for all dogs, and is an especially good technique to use if your dog is the fearful, shy or skittish type. If your dog doesn't approach the crate or if he has a fearful response like barking or running away from the crate or approaching it with fearful body language, you'll need to take this slower approach to help the poor boy see what a lovely place his crate is.

For this part of the training, you should have a bunch of small, extra-yummy treats

. Something very flavorful like hot dogs or jerky treats

will generally work better than biscuit-type dry treats. Make sure your dog's nice and hungry when you try this training exercise.

Sit down on the floor 4-6 feet away from the crate, holding the treats in your lap where your puppy can see them. If he approaches, give him a few treats and tell him he's a good boy. Hang out there for a minute or two, then slowly get up and move a bit closer to the crate and do the same thing. If your dog still seems nervous, you can end your session at this point, then repeat the same training exercise again that day. Repeat the exercise, getting closer and closer to the crate as your dog seems more comfortable, until Fido is able to take treats from you while you're sitting right in front of the crate door. Between training sessions, it's a good idea to just hang out with your puppy in the room where the crate is so he gets used to seeing it there and realizes it's not going to reach out and grab him!

Once your dog is happy and relaxed while taking the treats, you can move on to the next step. Put some of your treats on the floor just outside the crate door and let your dog pick them up. Once he's doing that, scatter a bunch of treats inside the crate, then just walk away. Sit nearby and see if Fido goes in to take the treats. If he does, repeat putting the treats on the crate floor and letting him pick them up a few times.

When he's enjoying your little treat game, put one last batch of treats in the crate and close the door with your dog outside of the crate. It sounds crazy, but boy, does it work. Walk away from the crate and let your puppy wonder why he's no longer able to go in to get the treats. We're using a bit of reverse psychology here... making your dog think he really wants to get in there! Like a nightclub with a velvet rope and a bouncer at the front door, his crate will seem like the place to be! He may scratch and whine at the crate door or just look at the crate with a puzzled look on his face. This is great! Hang out with your puppy in the room the crate is in for half an hour (or not quite as long if he's just dying to get into the crate). Then casually walk over to the crate and open the door, holding it firmly so there is no chance that it will move and frighten your dog as he is moving around the crate. Fido will be thrilled to be able to get into the crate to get all those goodies! Repeat this exercise a few times and your puppy will think going into his crate is GREAT.

Once your dog is going into the crate willingly to retrieve his treats, we're going to shut the door. As soon as your dog is completely inside the crate, gently close the door behind him, holding it closed with your hand rather than latching it. When your dog turns around to find the gate closed, give him a single treat through the front gate and open the gate to let him out immediately so he learns that a closed door isn't scary and doesn't mean he's locked in there forever. Again, make sure to keep a firm hand on the door as you open it so that it can't move suddenly and frighten Fido as he comes out.

Repeat this step, gradually leaving the door closed longer and giving more treats before opening up. If this is going well, latch the door and step away from the crate for a moment before returning to give your puppy his treat. Gradually step away a little farther and a little longer between treats.

Once you're able to step away from the crate for 30 seconds between treats, you should be ready to try leaving your dog in his crate a bit longer. For this part of the training, you'll need something yummy that will take a while for your puppy to eat or chew. This should be something other than his normal chew items - something of extra-high value that he only gets when he's in his crate. You'll make your dog very happy with a safe chew bone like a pig ear from the pet store or a raw marrow bone from the butcher. A hollow rubber toy filled with something yummy is another good choice. Most dogs go crazy for a hollow toy stuffed with canned dog food; if you freeze it before giving it to him, it'll keep him busy for a nice long time! If you worry that the canned food may give your dog a bit of an upset tummy, mixing plain boiled white rice with the canned food will help to prevent diarrhea.

in the crate. If your puppy ignores his bone in the crate, then tries to pick it up and bring it out with him, take it away from him and put it away until next time he goes into his crate. He can only have this special treat in the crate. After missing out on it a few times, he'll get the idea.

Gradually leave Fido in the crate for longer periods as he becomes comfortable. If you find that he engages in bratty behaviors like barking or trying to dig his way out of the crate, you may need to correct these behaviors before leaving him unattended in his crate. 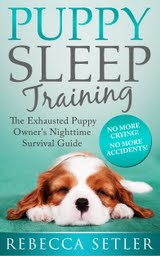 Want to be sure you're doing everything you can to help your puppy have a peaceful night? Buy Rebecca's instant download e-book, Puppy Sleep Training - The Exhausted Puppy Owner's Nighttime Survival Guide!